Some of Scholle IPN’s bag-in-box bags and taps are recyclable where Resin Identification Code (RIC) 7 is accepted. RIC 7, or “Other,” refers to products containing mixed plastics or those which might have additional components including non-petroleum-based plastics. If a Scholle IPN product is marked as RIC 7, it is likely because the tap or spout has a different type of plastic than the bag itself.

Some of Scholle IPN’s bag-in-box bags and taps are marked as RIC 4, or “LDPE.” Low-density polyethylene is a common plastic used in flexible packaging and is easily recyclable by most municipalities.

As always, recyclability of bag-in-box bags is contingent upon the disposal requirements of the product contained and the capabilities of the local municipality. 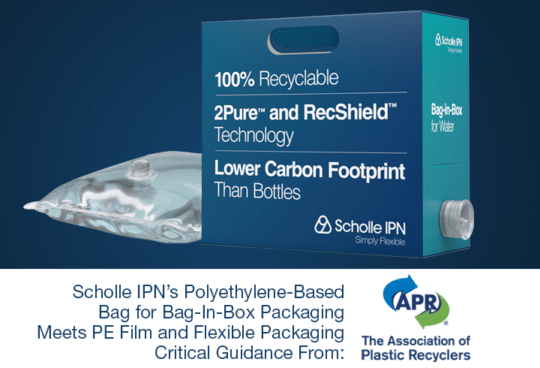 Scholle IPN currently offers recyclable and recycle-ready bag-in-box  and pouch packaging solutions, and is continuously improving upon our packaging technology to ease the recycling process. Check out our PP and PE RecShield™ films and our recyclable bag-in-box package for water to learn more about our offering and development processes.